Power Tools UK Reviews » Compound and Sliding Mitre Saw Reviews: Which is the Best Mitre Saw in the UK?

Workers in the building trade often need to make frequent or repetitive angled and / or beveled crosscuts such as those involved in the construction of baseboards or door frames. A number of different power saw types can be used to do this sort of work but one of the best-suited is the mitre saw (or miter saw if you are of North American persuasion). A mitre saw is a table top machine with a semi-fixed cutting head that can be lowered on to the workpiece to make a cut. Since the cutting head on a mitre saw can only move primarily in one axis (up and down), this makes for crosscuts that are very accurate, and produce sawn surfaces that are truly flat and perpendicular to the length of the workpiece.

In addition to cross-cutting, the mitre saw, as its name suggests, can also be rotated in the horizontal plane and fixed to a specific angle in order to make diagonal or mitred cuts. Mitre saws also usually have the ability to have their cutting heads tilted to one or both sides in order to also make bevelled cuts. As a result of this ability to be set at a range of different angles in different rotational axes, this makes cutting specifications on mitre saws quite a complicated affair and comparing different machines in order to choose the best one for one’s needs can be more challenging than with other types of power saws.

In this review of mitre saws, we first look at the different aspects of the mitre saw in order to determine what to look for when buying one, before going on to examine what mitre saws are readily on offer in the UK.

What to look for when buying a Mitre Saw

As with most power tools, looking at the different technical specifications of different mitre saws is critical to deciding on the best mitre saw for one’s situation. Below we outline some of the key technical characteristics to look at when buying a mitre saw.

Mitre saws come in a few of different variations but can be generally categorised into being either a compound mitre saw or a sliding mitre saw. Compound mitre saws are simpler and cheaper machines than their sliding counterparts but they have a more limited cross-cutting capacity. Sliding mitre saws have heads that can slide forwards increasing the maximum width of wood that they are able to cut. Deciding on which type of mitre saw to go for at the start of one’s search can help to significantly narrow down the field of options to choose from. In general, if one can afford the higher cost, it is usually best to opt for a sliding mitre saw instead of a compound one since it will almost always be a more capable machine and able to tackle wider workpieces. However, for some DIYer’s needs, especially for those who know exactly what they intend to use the saw for, having an excessively more capable sliding mitre saw as opposed to a more limited and economical compound one might represent overkill for some, with the extra funds saved being better used elsewhere.

In addition to the distinction between the sliding and compound variations, mitre saws also come in a number of different sizes with larger sizes increasing the maximum cutting capacities of the machines. Larger machines will use larger diameter blades which will give them a greater maximum depth of cut. This means that increasingly thick workpieces can be cut on increasingly large machines, so having a good idea of the maximum thickness of wood that one is likely to encounter will be important in choosing the right-sized mitre saw for the job.

Different mitre saws also have different central spindle bore diameters on which the blade fits and while there is no best size for the bore, choosing a machine that has one of the more common diameters is usually the best way to go in order to have the maximum amount of choice when purchasing replacement as well as other types of mitre saw blades.

Another factor to take into consideration are the other saw types in one’s workshop, in particular any table saws or circular saws that one already owns, which can also aid in the decision as to which mitre saw to buy. Choosing a mitre saw with the same blade size and bore hole diameter as these other saw types will often allow one to interchange blades between the different machines when needed.

Probably one of the most important specifications to look at when deciding on a mitre saw are the cutting metrics of the machines at the different angles at which they work. In general, there are four cutting capacity metrics provided with mitre saws:

The first cutting metric of the machine to look at is its maximum cutting depth and maximum cutting width in the default non-angled (neither beveled nor mitred) cutting head orientation (i.e. straight down 90 degrees perpendicular to the workpiece). As alluded to earlier, this is usually dependent on the size of the machine and the diameter of its blade.

Most, if not all, mitre saws can angle their blades by certain amounts to the left and right of the vertical to create a bevel in the wood or material being cut. When the blade is angled, it reduces the maximum depth at which it can cut through a workpiece so checking whether the maximum cutting depth of the blade when maximally angled fits one’s needs is also an important check to make before purchasing.

The same applies for the other type of angled cut that the saws can perform, the mitre cut. Similar to bevelling, cutting at a non-zero mitre angle will reduce the maximum width of material that the mitre saw is capable of cutting through and once again, making sure that one’s future mitre saw is capable of cutting the maximum-sized workpiece that one is likely to work with when the saw is angled to the maximum mitre degree is yet another important consideration to make before taking the leap.

Finally, mitre saws can also cut at both a non-zero bevel angle and a non-zero mitre angle simultaneously which will further reduce the maximum cutting capacity of the saw, so checking that this metric also fits one’s needs is the final metric to pay attention to.

Power and Speed of rotation

Similar to table saws and circular saws, the power and speed of rotation of the blade on a mitre saw will also affect how well it cuts as well as what materials it will be able to tackle. If exclusively cutting wood, then one wants to go for the highest powered and highest speed mitre saw that is available as long as other characteristics and affordability fit one’s requirements. This is because with greater power on a mitre saw, the harder and larger the wood substrate it will be able to tackle, while the greater the speed of rotation will provide greater control while cutting. There is, however, one exception to this general rule and that is for mitre saws that have been specifically designed to cut other materials in addition to wood, which usually means metal and plastic. Lower rotational speeds are needed to cut metal and plastic properly and some mitre saw manufacturers may have intentionally kept rotational speeds lower on their saws such that they are not cutting at their very best in any one particular material but instead are capable of cutting well across a range of different materials.

Popular Mitre Saws in the UK 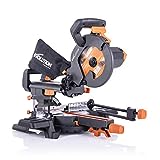 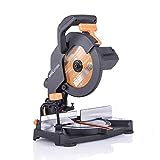 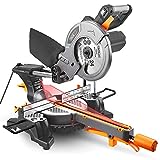 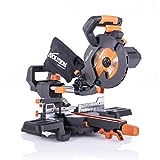 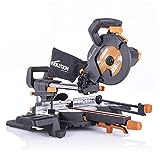 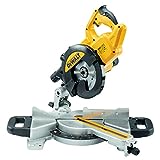