Electric Hand Planer Reviews: Which is the Best Handheld Power Planer in the UK?

A tool that has long been an essential component of the carpenter’s toolkit but now in its electrically-powered form is the hand planer. The handheld electric planer, also sometimes referred to as the power planer should not be confused with its larger bench-top cousin which is mostly known as a jointer planer in the UK but sometimes also referred to as a planer.

What can I use an electric hand planer for?

For the DIYer or the woodworking professional, electric planers has three main uses:

What to look for in an electric hand planer

​Today there are a number of different brands and models of the handheld power planer that are available for purchase, each with its own particular features and technical specifications. Therefore, when looking to buy one, the DIYer (or tradesperson) needs to be aware of and understand the various options available on the machines in order to make the best purchase possible according to one’s needs and personal budget. So what features might the electric planer possess? Let’s take a peak…

As is true of most power tools today, one of the key early decisions one has to make when buying a new machine is the type of system that will power it. With electric hand planers, the two key options are either mains-powered (corded) or the cordless variety that runs on a battery or two. Which type power system to subscribe to depends on a number of factors including, but not limited to, the degree to which the planer will be used, personal preference, the location of where the majority of the planing work will be carried out, availability of a mains power supply socket or access to a universal power tool battery system. So for example, if the majority of planing work will be performed outside, where access to a mains electricity power system is in short supply, then a battery-powered planer would most likely be the most convenient option. On the other hand, if a lot of hand planing work has to be carried out over a concentrated period, then not having to deal with ensuring that one has enough charged batteries at hand is a good argument for opting for a corded version of the power planer.

Once again as with most power tools, the higher the power rating of a power tool, the more one can usually do with the machine. In the case of the electric planer, a higher-rated power system means that more material can be shaved off with each pass of the power tool. In addition, more powerful electric planers can tackle harder woods with greater ease and produce a more refined finish. For corded mains-powered machines, power is measured in Watts (W) while for battery-powered devices, power is usually indicated in Volts (V).

Different makes of electric hand planers may have different numbers of blades and this is usually correlated with the quality of the machine. Better designed machines will have more blades as the higher number translates into soother and more refined cuts. In general, basic planers will have a single blade while more professional machines will have 2 or more blades that rotate at high speed to facilitate the cutting action.

The planing width refers to the width of material that can be removed with each pass of the hand planer. This is determined by the actual width of the planer. Although, larger planers are in existence, the majority of consumer planers on the market today have a common planing width of 82mm. Although parallel passes of the planer can be used to cover a wider area, this tends to leave a noticeable mark on the material at the boundary of each pass. Therefore, anything wider than 82mm that needs planing would be better accomplished using a bench-top jointer planer or the planing facility of a planer thicknesser.

Maximum depth of cut in wood

The depth of material that can be removed with each pass of the electric planer can usually be set on the planer in the order of fractions of millimetres. Each planer has a maximum depth that it can be set to which is usually in the range of 2-4mm and goes hand-in-hand with the power of the machine, so higher powered machines can plane off more material with each pass of the tool. Obviously repeated passes of the tool can accomplish the shaving off of greater depths of the material, so even lower powered planers with lower maximum depth settings can still ultimately achieve the same result albeit with less efficiency.

Electric hand planers usually come with a fence that can be attached to the machine to guide it along and plane only a small section of the workpiece by using only part of the width of the planer to do the cutting. This can be used to make rebates (also known as rabbets) in wood. With some specialised planers designed specifically for rebating, the depth of the rebate can be unlimited. However, with most regular electric power planers, the motor housing limits the maximum depth of rebate the planer can perform. Therefore, making sure that the planer of choice has the capacity to do the size of rebates required should be assessed before purchasing.

Most makes and models of electric planer are designed to rotate their cutting heads at a specific speed which is a function of power and structural design. In general, higher rotational speeds produce smoother more refined cuts and should be preferred over slower spinning machines.

Like other woodworking tools, electric planers often produce a lot of sawdust and debris which can make for a messy work environment if not dealt with expediently. The best way to deal with this waste is to have some sort of dust collection system integrated into the power tool itself. This usually comes in the form of a dust collection bag that can be attached to the planer or the ability to attach a vacuum system to the power tool to aspirate the sawdust away. Well-designed machines will also provide the choice of ejecting the sawdust and debris from either side of the planer to maximise its versatility and so that it can be used by both right-handed and left-handed operators.

V grooves under the shoe

Most planers will have one or more grooves located in the underside of the front shoe of the planer. These are designed for chamfering the corners of workpieces, one of the principle uses of the electric planer.

Finally, well-designed handheld power planers will have a retractable foot on the underside of the machine usually integrated into the rear shoe. The purpose of this is to prevent the accidental damaging of the blades or of the surface on which the planer is placed if it is accidentally put down while the blades are still spinning. 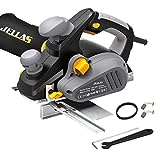 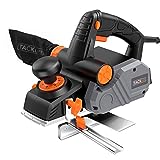 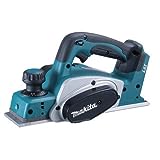 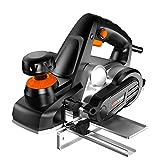 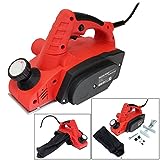