Plunge Saw Reviews: Which is the Best Plunge Saw in the UK?

The Plunge Saw vs The Circular Saw

One of the questions most often asked with plunge saws is whether they are really necessary to own if one already has or plans to get their hands on what is often a cheaper circular saw. Can a circular saw not do pretty much everything a plunge saw can? The answer to that question is yes and no. Although the plunge saw is very much like the well-known circular saw, it has some physical attributes as well as mechanics that are clearly different, and in some situations can produce results that are superior to those obtainable from the familiar circular saw.

So what are the main differences between the two saw types? Well, first of all, the blade on the plunge saw is completely enclosed and is only exposed during the cut as the handle is pushed down. This allows the plunge saw, as its name indicates, to plunge! In practice, this means that although circular saws have to start cutting from the end of a workpiece, plunge saws can plunge at any point on the workpiece and begin the cut from there.

Plunge saws also have a flat side to them which can be used as a guide to cut very close to the edge of a floor or wall, whereas circular saws are generally bulky on both sides of the blade.

Another key physical feature of a plunge saw is that it has the ability to be used with a track which makes every cut much more accurate, even more so than using a circular saw with a side fence. A track also allows the plunge saw to make repeated cuts exactly along the same cutting line which is important for certain types of sawing where multiple passes of the blade are needed to get a good end result. Hand-in-hand with this track-using feature is the ability of the plunge saw to cut without chipping out the edge of the material. This is credited in part to the sacrificial plastic edging found on plunge saw tracks which acts as an anti-chipping cover over the edge being cut. It should be noted, however, in recent years even some circular saws have started to incorporate the ability to use a track (such as the Evolution R185CCS circular saw) so the lines between plunge and circular saws have started to blur a little.

Finally, when it comes to dust extraction, plunge saws win hands down over their circular saw cousins, as their enclosed blades tend to prevent debris from flying off in all directions, and the enclosing structure surrounding the blade acts like an extension of the vacuum tube thereby maintaining the sucking power of the plunge saw’s vacuum system right through to the cutting interface.

Unique Uses of a Plunge Saw

​Aside from the regular plunge cutting that the saw can perform, the plunge saw can also do certain other types of cutting especially well. To begin with plunge saws can be used to trim the bottoms of doors without even having to remove the doors from their hinges.

Plunge saws are also the saw to use when cutting wall installation, as one can be very accurate with the cut and the mess that is usually produced when cutting foamy or fibrous insulation can be avoided by employing the superior vacuum system of the plunge saw.

Plunge saws are also particularly good at cutting through floorboards as not only can the saw cut very close to the edge of the floor, they are also good at reducing the chance that structures under the floorboards, such as hidden pipes or wires, are mistakenly nicked or severed. This is credited to the ability of the plunge saw to precisely control the plunge depth of the blade with millimetre levels of accuracy.

What to look for when Buying a Plunge Saw

There are a range of features and technical specifications that one finds on plunge saws. Most of these are outlined below:

Plunge saws come in either a mains electricity-powered form, in which case their power specification is measured in Watts, or in a battery-powered form, where the voltage rating of the device is the unit of power measurement. As with most power tools, corded plunge saws are generally more powerful than untethered battery-operated ones. Corded machines also have unlimited usage time, although the plunge saws can be limited by their need for ready access to a mains electrical socket. On the other hand, battery-operated machines are limited by a finite battery supply, although universal battery systems of today, which allow the interchange of batteries between a range of power tools from a single manufacturer, reduce the chances that one will run out of power at an inconvenient time.

Like circular saws, plunge saws come in different sizes which is mostly determined by the blade size they use. The most common blade size used by the UK consumer is the 160mm or 165mm diameter blade, but larger size machines using larger blades are also available. Another metric to pay attention to, especially when purchasing replacement plunge saw blades is the bore hole diameter of the blade which fits over the motor spindle of the saw. Fortunately, most plunge saw blade bores conform to a single specification of 20mm in diameter.

One of the most important specifications on a plunge saw is the maximum depth of cut that the machine can perform. This is primarily determined by the size of the machine and the blade diameter it accommodates, but it is also determined in part by the physical design of the machine. Plunge saws can also often do angled or beveled cuts which reduces the maximum perpendicular blade penetration that the machine can achieve since the blade is travelling laterally as well as downwards. Consequently, one should check to make sure that the machine of choice also has the capability to perform the depth of cuts required when angled. Clearly, aiming for a plunge saw with the greatest maximum depth of cut at both the default 90° angle and at its maximum beveled angle will provide the user with as versatile machine as possible.

As noted above, plunge saws, like circular saws, can often angle their blades to carry out an angled or beveled cut. The standard maximum angle that the blade can be tilted to is usually 45°. However, in some situations, being able to go a few degrees past the 45° setting can also be useful when doing mitring work, and consequently some plunge saws have been designed to go beyond the 45° mark by two or three degrees. A similar situation is true at the other end of the scale where being able to tilt the blade further than the 0° setting, usually by a single degree, can also be useful for a similar reason.

As with most power tools, weight is another criteria to take into account when purchasing a plunge saw, as the higher the weight, the more unwieldy the machine and the more tiring it will be for the operator especially if used for extended periods of time.

Like most power saws, plunge saws are not quiet machines and wearing ear protection is recommended when operating one. This is especially true when the plunge saw is to be used repeatedly over a short period of time or if it is to be used on a regular basis.

Some plunge saws have a feature that allows them to set the machine so that it will only score the workpiece rather than make a full cut. This is particularly useful when cutting laminates which are prone chipping at the cutting edge. By scoring the workpiece before doing the actual cut reduces the likelihood that a chip will occur in the finished surface of the laminate.

Riving Knives and other Kickback Protections

Some plunge saws are equipped with riving knives that are more commonly associated with table saws. A riving knife increases the safety on a saw, reducing the chances of a kickback by preventing the wood from pinching the blade after the cut. Riving knives on plunge saws tend to be spring loaded so that plunging cuts can still be performed without interference from the riving knife. Other anti-kickback mechanisms are also sometimes incorporated into plunge saws, especially those without a riving knife. These include integrated electronic kickback protection and a mechanism that prevents a plunge saw from moving freely backwards along a track (although some operators may find this latter mechanism interferes with how they naturally move the saw).

For most power tools, a carry case is an invaluable accessory to have in order to safely store and transport what is often an expensive tool. This is especially true of plunge saws which are usually bulky, heavy, and relatively expensive machines.

Popular Plunge Saws in the UK 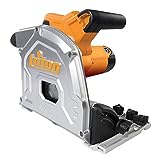 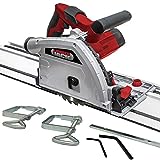 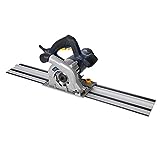 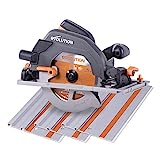 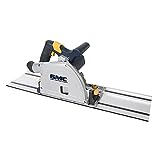 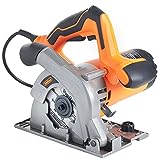 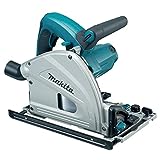 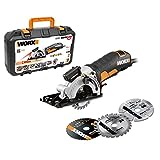 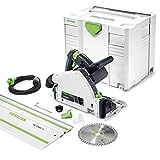 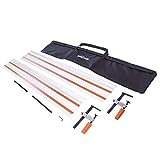