Power Tools UK Reviews » Reciprocating Saw Reviews in the UK: Which is the Best Recip Saw?

One of the power tools that probably appears last on the ‘tools-to-own’ list of most DIYers is the under-appreciated reciprocating saw or recip saw (also known as a sawzall in the US). However, the recip saw has many different roles to play in DIY building jobs and especially in any sort of demolition work, and as a consequence is slowly becoming one of the power tools that DIYers as well as tradesmen will have ready at hand as part of their general tooling kit. With its recent increasing popularity, more and more makes and models of the recip saw have appeared on the scene, and choosing the best reciprocating saw for oneself today can be more of a challenge. In this review of reciprocating saws, we first look at some of the many uses of this saw type as well as the features and technical specifications to look for when buying one. We then examine what actual reciprocating saws are available to the UK consumer towards the end of the page.

Uses of a Reciprocating Saw

The reciprocating saw can be almost thought of as a powered hacksaw as it uses blades which are not unlike hacksaw blades that are powered by an electric motor to generate the backwards and forwards cutting motion. Unlike using a manual hacksaw however, the speed of the sawing action is very much accelerated, providing a fast and clean cut with minimal effort. As a consequence, the recip saw is unlike most other power saws and can often be the only power tool that can get a particular job done with any sort of efficiency. Reciprocating saws are especially invaluable when sawing in tight spaces or at odd angles, as well as in timber that has hidden nails or other metal elements within it. And the recip saw is not limited to just cutting timber, with the right blade, the reciprocating saw can cut through a range of materials including metal and plastic as well.

As a consequence of the wide variety of different types of blades that are available for the recip saw, the saw is used by a range of different trades and in a variety of different situations. For example, the recip saw is particularly useful for removing or remodelling assembled studwork timber in stud walls and other similar structures, as the large nails in studwork are usually hammered into the wood at awkward angles and are often difficult to remove. The recip saw can usually quickly dispatch them often without doing any damage to the timber itself (as shown in the video clip below).

Another typical use of the recip saw is the shaving off of a small section of timber without having to disassemble the whole structure (see video clip below).

Recip saws are also the saw that is often turned to when some substantial cutting needs to be done at elevated heights, such as when perched up a ladder or when needing to hold a power saw over one’s head. This is because using a recip saw is a lot easier to control and safer than equivalent power saws like a circular saw. Recip saws can also be used to make plunge cuts in a variety of materials rather than having to buy a dedicated plunge saw for the task (see video clip below).

Finally, recip saws are not just used by DIYers and tradesmen but also by gardeners who need to cut through thick branches or other natural wooden structures that garden tools have difficulty handling.

What to look for in a Reciprocating Saw

Now that you have had a taste of the many different uses of the reciprocating saw, you probably want to go out there and give one a go yourself. For many of us, the only option to get our hands on one, is to go out and buy it. Today, there are several different brands and models of recip saw available, some well known, others not so much, and each with its own unique characteristics and specifications. So what should one look for when buying a reciprocating saw? Let’s have a look…..

As always with power tools of today, one of the first decisions to make when buying a new machine is the choice of the type of power system that will run it. The situation is no different for the reciprocating saw where both corded and cordless electric options are available. As is so often the case with power tools, the decision on which type is best is very much dependent on how one will be using the tool, personal preference, as well as the type of DIYer or tradesman one is. However, in basic terms, If the recip saw will be used for long stretches cutting through tougher materials, then the corded variety should be preferred over the cordless type. This is because corded reciprocating saws have more power and can accept bigger blades, all of which leads to being able to make unlimited bigger and faster cuts. On the other hand, corded recip saws cannot be used where the mains power supply is inaccessible, or when dragging along a power cable behind it is tedious or dangerous, such as when working up a ladder or on scaffolding. In these cases, a cordless recip saw is the way to go, and choosing one that fits with the brand of battery system of one’s other power tools, so that batteries can be used interchangeably, should be the brand to prioritise.

Different reciprocating saws often have different input power ratings. Going for the highest powered recip saw that is within one’s budget is the way to go here as the higher the power the tougher the materials the saw can handle. Higher power also means that larger blades can be used which translates into deeper cuts.


Similar to power, the larger the degree to which the blade oscillates or the stroke of the saw, the quicker and more aggressive the cut the recip saw is able to make, so aiming for a recip saw with the largest saw stroke that one can afford is what one should aim for when buying a new machine.

Maximum depth of cut in wood

This is mostly the result of a combination of both power and saw stroke which will determine the maximum ‘depth’ of cut a recip saw will be able to make. When talking about ‘depth’ here, it actually refers to the maximum ‘width’ of the wood that the recip can tackle. In other words, the maximum depth of cut is really determined by the longest blade that the recip saw can operate effectively.

Older and perhaps less reputable brands of recip saw will require the use of an Allen wrench when changing and securing the blade to the saw. However, the majority of modern reputable reciprocating saws today use a tool-less system so that blades can be quickly changed in order to tackle a variety of different jobs with the least amount of down-time. The tool-less variety of recip saw should be the type of recip saw to aim for. As an aside, most recip saw blades today have a universal fitment, meaning that they will fit into just about any brand of reciprocating saw on the market. Consequently, most of the time, one does not need to be too concerned with the availability of the right blade fitment when choosing a recip saw. Blades can usually be fitted with the cutting teeth facing downwards or upwards and, on some machines, can even be pointed out to the side giving the reciprocating saw added versatility.

The overwhelming majority of reciprocating saws today have variable speed implemented either through variable trigger pressure or through a bespoke variable speed dial on the machine. As a result, this is not really a feature that one usually needs to look out for when buying a recip saw unless buying a truly unheard-of brand. Being able to control the speed of the blade oscillation on the recip saw can be useful for accuracy in plunge and other cuts where an initial slow speed can be used to ‘score’ the cutting line and then raising the speed as the blade penetrates into the material. Variable speed on reciprocating saws is also useful for cutting different materials more effectively. For example, a slower speed can be used to cut through metal to prevent it from over-heating.

The foot (also sometimes referred to as the fence or shoe) is the frontmost structure on the recip saw and is usually pressed up against the material being sawn for better control of the cut. The foot can often be adjusted so that it is set closer to or further away from the main body of the saw and provides control of how deep the blade penetrates the material being sawn. The foot adjustment is also useful for ensuring use of different parts of the blade so that blade wear can be more evenly distributed across most of its length thereby extending its useful life. Most recip saws today make use of an Allen wrench for the foot adjustment as it is not something that needs to be done frequently, however, some manufacturers have started to implement a tool-less system for foot adjustment as well.

Popular Reciprocating Saws in the UK

Now that we have a good idea of what to look for when choosing a recip saw, let us now take a look at what recip saws are on offer to us here in the UK: 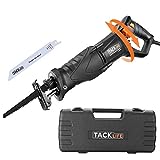 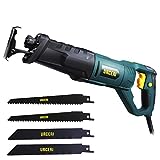 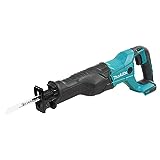 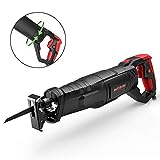 Ryobi RRS1801M ONE+ Reciprocating Saw, 18 V (Body Only)
View on Amazon
Bestseller No. 7 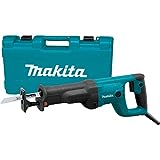 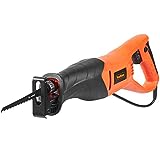 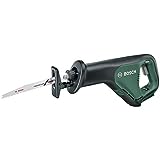 Bosch 06033B2400 Cordless Reciprocating Saw AdvancedRecip 18 (Without...
View on Amazon
SaleBestseller No. 10 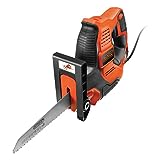