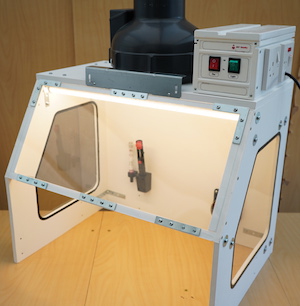 When making stuff or doing DIY, one often needs to solder wires or other metals together. However, the act of soldering invariably produces fumes that are bad for our health, especially for those suffering from or are susceptible to asthma or another respiratory disorder (not to mention all the COVID-19 craziness!).

There are a number of ways to avoid the fumes produced from soldering but probably one of the best is to use a fume hood, which sucks away the offending air, trapping it, or just sending it to the outside. However, buying an off-the-shelf commercial fume hood, even the small ones that are specifically designed for soldering, is often prohibitive cost-wise.

So that is where this DIY soldering fume hood build comes in.

To make the DIY fume hood as economical as possible, scrap wood was used as much as possible. Making it reasonably easy to disassemble was also aimed for, so the main wall panels were designed to be held together using corner braces rather than using anything permanent like glue.

The key component in any fume hood is the extractor fan which has to have the power to move enough air through the hood in order to draw the unwanted solder fumes away from the user.

In order to do this, one has to decide on the size of the opening to the hood working area and to make sure that the fan installed has the necessary specifications to achieve sufficient air movement across this opening.

In the case of this build, an opening of 576 mm x 260 mm was settled upon, which was based on ensuring there was enough space to work through, as well as the size of building material that was at hand. A rough estimate of about 0.75 metres per second air speed across the fume hood opening was deemed to be more than enough to ensure sufficient air flow to carry away any work fumes.

Therefore, it was calculated that a column of air measuring 576 mm x 260 mm x 0.75 m = 0.11232 m3 would need to move through the fume hood opening every second. Since fans are usually rated in the volume of air moved per hour, that meant the fan had to exhibit the following minimum air flow:

One of the fans from Rhino Ventilation satisfied our air flow requirements with an air flow of 420 m3/hr, so one of these was purchased for the project.

Specifications of some of the extractor fans from Rhino Ventilation

The Top and Back Panels

Some scrap panelling was used to form the main body of the fume hood. For the back and top panels, this comprised of 15 mm laminated chipboard which was salvaged from an old kitchen cabinet renovation. Any unwanted holes and rebates were filled with wood filler and sanded down. Holes (shown in the images below) for the fixings - 75mm corner braces - were made, which would eventually hold the fume hood together. In addition, a 130 mm diameter hole was cut into the middle of the top panel with a Rotozip (a rotary power tool) to accommodate the 125 mm diameter air intake aperture of the Rhino fan. 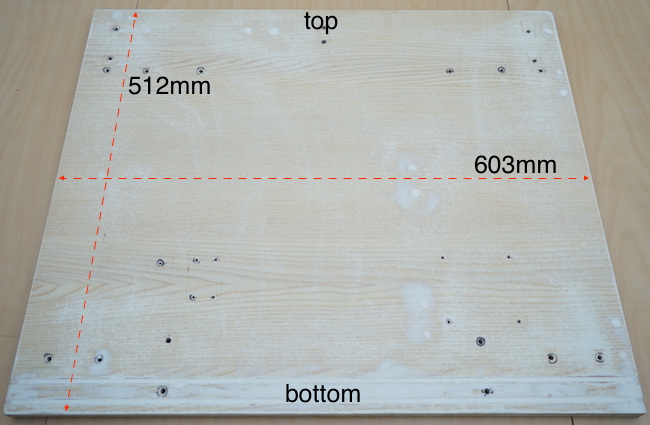 The back panel (after wood-filling and sanding)

The top panel (after wood-filling and sanding)

The top and back panels were primed with adhesion primer as shown in the video below. The panels were later coated with some standard matt white paint.

For the front viewing window, some 2 mm thick acrylic sheet was cut to size, and the frame was constructed out of somescrap stripwood and some quadrant moulding with the following dimensions:

Holes were drilled for the fixings, the exact positions of which were judged by eye as all the components were assembled together.

The viewing window and support frame

For the side panels, we used some scrap panels of 12 mm thick MDF which were cut to size (as shown in the picture below). A diagonal cut was made on one corner of each panel at an angle of 150º  - these were for the front viewing window (in retrospect, the angle should have been larger for a more natural working position when using the fume hood). Once again holes were drilled into the side panels for attaching 75 mm corner braces at strategic points along the wall. 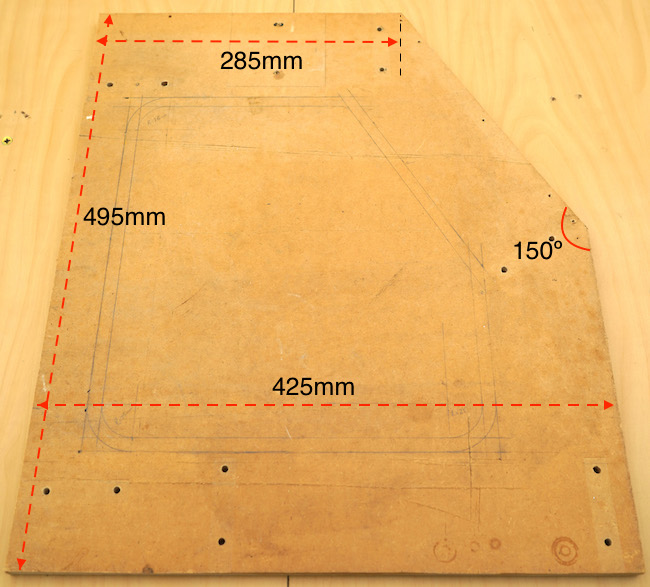 One of the side panels

A large central opening was cut in each side panel using a scroll saw to house the side windows as shown in the video below. Care was taken so that the window opening did not interfere with the corner brace fixings that would ultimately hold the fume hood together. To ensure the opening was as accurate as possible, a bobbin sander was used to finish off and straighten the edge.

The sanding was followed by the rebating of the edge of the window openings with a wood router. This was to provide a recessed surface on which to attach the window on the outside, and also to create a decorative edge on the inside. The rebate routing bit was set to produce a rebate of 2 mm in depth and 9 mm in width.

The side panels were then coated with white primer, followed by 2 coats of white matt paint, applied with a roller. The rebated edge was also primed with the same primer and a small paint brush.

As standard epoxy glue, which has a yellow tint to it, would be used to attach the windows, it became clear that this would give a rather unsightly yellow appearance over the white-painted rebate since it would be showing through the transparent window. To avoid this, the rebated surface on the outside (as well as the inside for aesthetics) of each panel was carefully painted with black paint. Care was taken not to soil the other parts of the white-coated side panel, through the use of narrow paint brushes, blue masking tape and a steady hand.

For the side windows themselves, the same 2 mm acrylic sheet used for the front viewing window, was cut to size. The best method to do this involved the scoring of the surface of the sheet with a Stanley knife before snapping it over a right-angled edge (in this case, the table edge). These acrylic windows were then shaped on a disc sander to give them their rounded corners so that they would slot nicely into the rebated opening of the side panel (see video below).

Once the windows were of the correct size and shape, they were protected from any glue 'squeeze-out' by masking tape (this was necessary as the original protective film on the acrylic sheet was coming away at the edges). The painted side panel was also masked off to protect it from any excess glue. Finally, the edge of the acyrlic window, that would interface directly with the glue, was roughened up with 120 grit sandpaper to enhance adhesion. Once everything was ready, the acrylic window was glued to the side panel using 90 minute epoxy glue.  The leftover MDF side panel cut out was then used as a support / weight on the window for it to bind strongly to the side panel, while any glue squeeze-out was carefully cleaned off before removing the protective masking tape.

Appropriately-sized wood derived from an old wardrobe drawer was cut to size using an Evolution mitre saw. On one side of this power supply box, two openings were cut out using a scroll saw. These were to accommodate the electrical back boxes (dry lining boxes) that would eventually house the switched spur and the external electrical socket. To finish off, these openings were then sanded down for accuracy using a bobbin sander.

On the opposite wall of the power supply box, a 12 mm hole was drilled. This was followed by the use of a 20 mm forstner drill bit to create the reccess needed for the cable gland and wire that would carry power to the extractor fan.

The base of the power supply box was attached to the top panel of the fumehood using six countersunk screws, and holes were drilled to accommodate the wiring for the internal lighting and internal power socket coming up from inside the fume hood. Wooden support posts for the power supply box were also cut out. In this case, these were from some 18.5 mm thick plywood leftovers from another project. These posts were then glued (with wood glue) onto the bottom panel of the power supply box to provide support for the attachment of the side, rear and top panels. Everything was assembled to make sure it all fit together before then dismantling it for priming and painting.

The side walls, rear and top walls of the Power Supply Box were all coated with adhesion primer before being spray painted with 3 coats of white gloss spray paint.

For the button panel of the power supply box, this was designed in the 3D modelling software, Blender, incorporating the correct size holes for two buttons that would operate the extractor fan and the internal lighting. These red and green buttons were of the Arcoelectric brand (now owned by the bulgin corporation) and were sourced from Farnell. The final design of this front panel was 3D printed on a Velleman K8200 3D printer using PLA (see below). 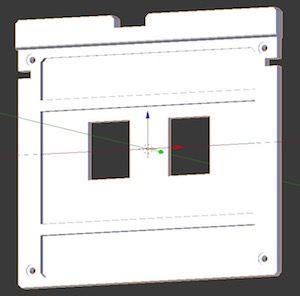 3D model of the button panel in Blender

The printed button panel was then sanded down using 120 grit sandpaper, before applying wood filler (and a little water to help it along) to fill any small gaps in the printed part. This was followed by hand sanding using 300 grit paper, and then 600 grit sandpaper. Once the button panel was sufficiently smooth, the part was sprayed with three coats of filler primer, waiting 30 mins between each coat, before lightly sanding the part using P600 sandpaper 24 hrs later. Finally, 3 coats of white gloss spray paint were applied to the button panel, once again waiting at least 30 mins for each coat to dry before applying the next.

Finally, once all the individual parts were ready, the solder fume hood was put together, wired up....and tested!