Our latest project involves a neat idea that a couple of DIY enthusiasts recently put together involving the addition of a digital depth gauge, in the form of a set of digital callipers, to a pillar drill / drill press. Normally, inexpensive drill presses come with a crude mechanical depth stop, so adding a set of callipers to the drill provides a level of accuracy that is far better than the depth stop alone.

To make this drill press digital read-out or DRO, the digital callipers are installed on the head of the drill press through the use of a couple of DRO adaptors attached to the jaws of the measuring device. With one of the calliper jaws fixed in place, the other is free to move in unison with the upward and downward motion of the drill bit, thereby measuring the travel depth of the bit as it penetrates a workpiece. In the case of the original authors of this build, the DRO adaptors were made out of metal and were machined to fit. We liked the idea so much that we decided to make a similar build, but instead of repeating the same machining process, we thought it would be more useful to provide an alternative way of making the adaptors, namely through the use of 3D printing.

One of the most interesting designs for the drill press digital depth gauge comes from Patrick Sullivan.  Located in the US, Patrick has machined the depth gauge adaptors for his WEN-branded drill press:

Another design that is also interesting was created by Colin Knecht over at woodworkweb.com, where he attached the digital callipers to his industrial-looking drill press:

Our drill press DRO for the 'generic' UK pillar drill

Over here in the UK, the WEN drill press is not readily available, and most of us don't have an industrial drill press lying about, so we thought it would be a good idea to make a similar depth gauge for the pillar drills that are more readily available to DIYers on this side of the pond. 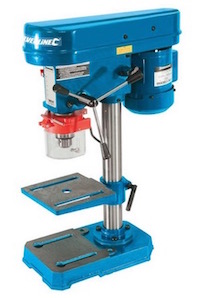 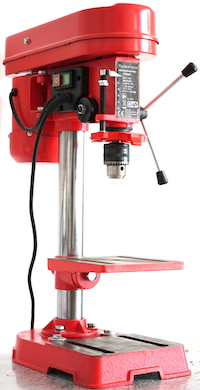 We happen to own one of these basic generic drills, so we decided to upgrade its basic mechanical depth stop with a digital depth gauge of its own. Instead of machining the adaptors as Patrick and Colin have so skillfully demonstrated, we 3D designed ours and then 3D printed them. 3D printing the DRO adaptors not only complements Patrick and Colin's excellent work but also provide our UK compatriots with an easy way to replicate the process for the drills available over here. So if you also have one of these generic drills as well as access to a 3D printer, look below for the 3D printing (.STL) files.

Dimensions of the UK pillar drill

The first thing we checked were the dimensions on our generic drill around the area where the digital depth gauge was to be installed. NB: if you decide to print out your own adaptors from the 3D files provided further down the page, check first to make sure that your drill has the same dimensions. 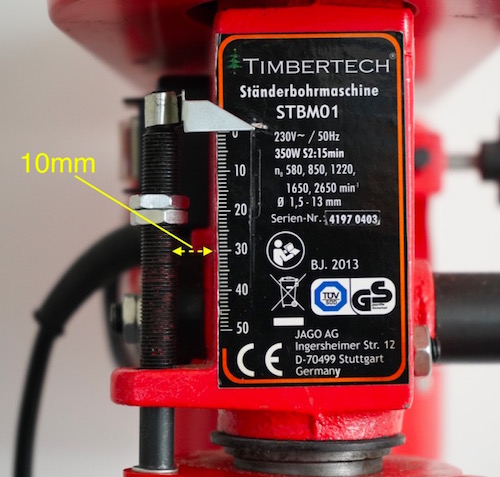 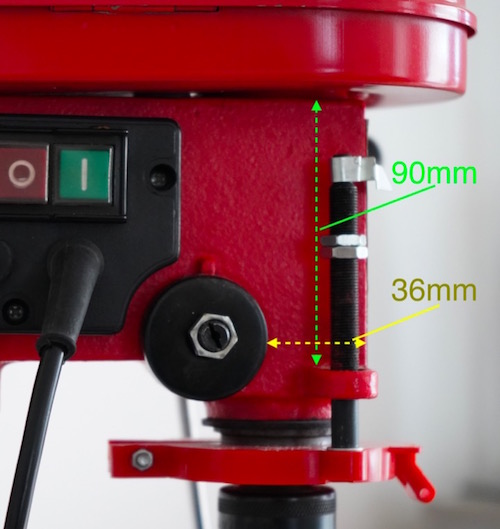 We then looked for a set of low resolution digital callipers (since a higher level of accuracy seemed superfluous for a pillar drill) and settled on the Tacklife digital callipers available from Amazon, as they fit the bill specifications-wise, and also had some good reviews. They were also primarily made of plastic so they were light and easy to drill through.

We then modelled the Tacklife callipers in the 3D modelling software, Blender, and based on the above dimensions of the drill head, the adaptors were designed and printed out in PLA on a Velleman K8200 3D printer. To 3D print the upper and lower DRO adaptors, download the .STL files here. 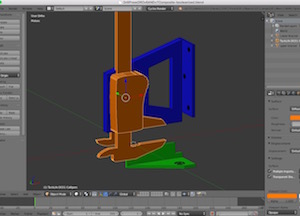 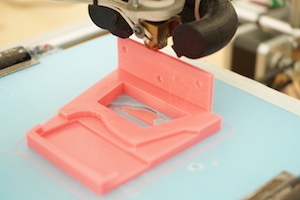 We then drilled and tapped three holes into the side of the pillar drill head corresponding to the holes in the upper adpator. We planned to use M4 machine screws to secure this part to the drill press, so we used a 3.3 mm cobalt drill bit to make the holes and an M4 x 0.7 plug (bottoming; 3rd cut) tap to thread them. 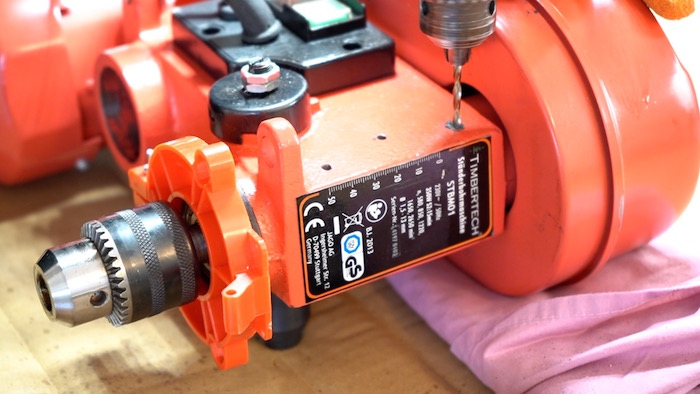 Drilling Holes into the Side of the Drill Press Head

The upper adaptor, once painted (see 'Spray paint finish' below), was secured to the drill head with three M4 x 8mm machine screws: 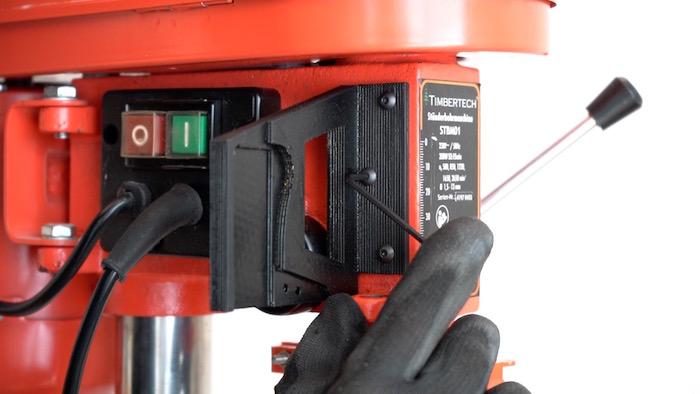 Attaching the Upper DRO Adaptor to the Drill Press 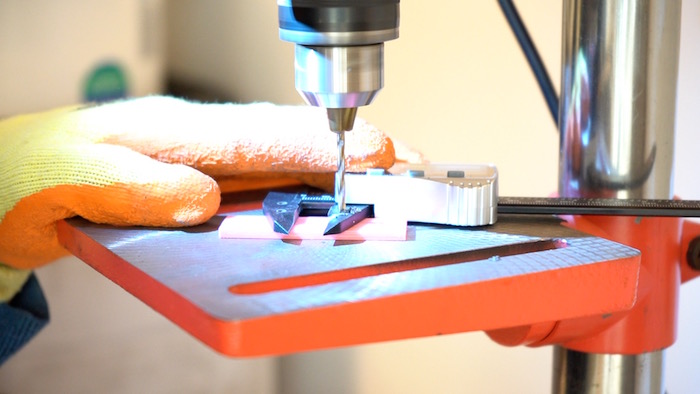 The DRO adaptors were spray-painted with filler-primer followed by black satin spray paint to produce a nice final finish.

Finally, once the two parts were dry and ready, the drill press DRO assembly was completed. 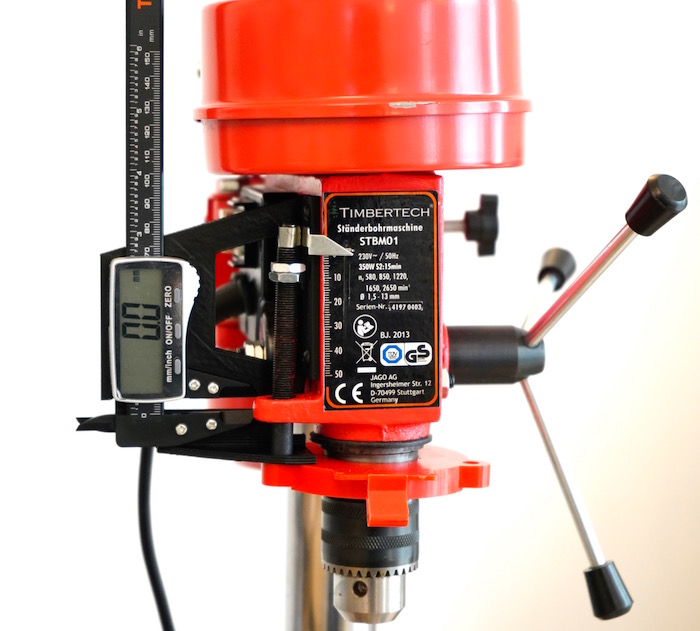