​A major difference amongst air compressors is whether they are lubricated with oil or are oil-less. There are of course advantages and disadvantages to each and personal preference also plays a role in determining which is favored.

Oil-free compressors run much louder than the equivalent oil-lubricated models, but they generally weigh half as much. In addition, oil-free models are maintenance-free whereas their oily counterparts need periodic oil changes just like any engine. Another significant advantage to oil-free compressors is that they can operate in more than one orientation, whereas the oil-based ones must remain upright both to function and to be transported otherwise they will leak oil. Since the oil-free compressors are less expensive than the oil-based ones, they have started to predominate especially amongst the weekend DIYer and small business.

Another important consideration, is the amount of current draw each requires. Oil-based compressors usually require more amps to get going, and don't even bother looking into oil-based models if you are ever planning to start up in a cold garage - oil becomes more viscous at low temperatures often making it near impossible for the compressor motor to start. 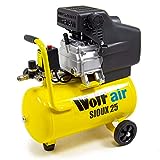