As a DIYer or tradesperson, a building project or job can sometimes call for a serious bit of sanding and one sander that is often relied on to carry out these larger jobs is the portable belt sander. The belt sander is a powerful sanding machine that needs a certain level of mastery to use correctly and as a result is not really recommended for beginners or the inexperienced. The belt sander also does its works very quickly, so much so in fact, that it is entirely possible to make a mess of a project if one is not careful.

Belt sanders are, above all, ideal for the sanding of extra rough surfaces and they are usually used as the first step in a sanding project which is then followed by a less aggressive sander such as the random orbital sander or the detail sander to obtain the final smooth finish. The belt sander especially comes into its own when working on large areas such as on flooring or on table-tops particularly when removing old coats of varnish, paint, or other similar coatings which can take significantly longer with a less powerful sander. It can also be especially useful when a significant amount of material needs to be removed from a surface such as when reducing the length of a workpiece that has been inadvertently cut slightly oversize.

In this review of portable belt sanders, we first look at how one typically uses a handheld belt sander before exploring the features found on today’s crop of belt sanding machines available to the UK consumer. Then, once armed with this knowledge, we will be in a better position to choose a portable belt sander for purchase (which is presumably the reason for your visit to this page today!) as we examine the properties and technical characteristics of popular belt sanders on the UK market today.

How to use a portable belt sander

When using a portable belt sander, especially for the first time, there are a few important things to remember to ensure good results:

What to look for when buying a belt sander

Like most power tools these days, portable belt sanders are made by a number of companies, each of which also might field more than one model of belt sander on the market. As a result, choosing the best belt sanding machine for oneself can sometimes be a difficult task. In order to make the choice of belt sander easier, we outline below some of the characteristics to look out for when purchasing one.

In general, and as with most power tools, the higher the power rating of the tool, the tougher the jobs it can handle. In the case of the belt sander, this means the more power the machine has, the faster and more aggressive its sanding action will be, which should result in more efficient smoothing down of a rough surface.

The sanding area of a belt sander is represented by the area in contact with the workpiece. Intuitively, the larger the sanding area, the faster one can finish the sanding task. Most consumer-targeted belt sanders, however, have similar dimensions with differences of only a few centimetres in some cases.

The sanding belt dimensions represent the total length and width of the sandpaper belt when it is opened up and laid out flat. There are a few common sizes that sandpaper belts are made into, and when choosing a a belt sander, a good idea is to look at the availability of the size of sandpaper that it is designed to use. Above all, one wants to avoid being locked into a sandpaper belt size that is only used by a single brand of belt sander since this usually means more expensive sandpaper replacement costs as one is forced to buy them from what is most likely to be an expensive brand-name manufacturer.

Some belt sanders have the ability to vary the speed at which the sanding belt turns. This increases the versatility of the belt sander as different types of sanding jobs can benefit from being able to set an optimal speed. In general, the more delicate the sanding work that needs doing, the slower the speed that should be set on the belt sander.

Popular Belt Sanders in the UK

(If you are located in the US, then check out what the popular belt sanders are in the US here)

The PBS 75 A belt sander, made by the German company, Bosch, is a heavyweight prosumer power tool that is well-designed, well-balanced, and sports some excellent features. It has a medium-powered 710W motor that can generate enough torque for most DIY jobs and an automatic belt-centring system that keeps the sanding belt from coming off during use. The sanding belt also runs flush with the machine's body on one side allowing it to sand effectively right up to the edges of work areas. The Bosch PBS 75 A also has a simple belt-changing system, operated through the use of a lever that is pulled to release the tension on the belt, allowing for quick and easy removal and replacement of the sanding belt. The belt size on the Bosch PBS 75 A is the standard 75mm x 533mm, readily available from several manufacturers and merchants. However, it is recommended to stick with Bosch-branded sanding belts as slight variations in size tolerances from other manufacturers can lead to belts that are either slightly too loose or slightly too tight for optimal service life.

The Bosch PBS 75 A belt sander is also a well-built machine. This is partly due to some of its components being made of metal instead of the more fragile plastic parts found in less reputable machines. However, these more durable components also make the Bosch PBS 75 A a relatively heavy machine, which can make extended use of the tool more tiring, especially for those accustomed to using lighter-weight belt sanders. In addition, any sanding that is vertical in orientation or worse, overhead, means that using the Bosch machine requires strength and stamina to hold it in place, especially over extended periods. Fortunately, for ease of use, the power switch on the machine can be locked in the 'on' position so that this, at least, helps with reducing hand fatigue. This lock-on feature is also essential for using the belt sander in its bench-mounted configuration (see more on this below). The combined effect of all these characteristics, and together with its overall bulkiness, means using the Bosch PBS 75 A can take a little getting used to.

The Bosch belt sander's weight and power also mean that it sands at a quick rate, with its weight doing most of the work rather than there being any need to apply pressure on the power tool. Indeed, it can be easy to remove too much material from the surface being sanded if one is not careful. Notably, it does not have user-mediated variable speed control, which means that the sanding belt speed cannot be optimised for less aggressive sanding.

Noise-wise, the Bosch PBS 75 A is one of the noisiest electric belt sanders available to the consumer and certainly requires the use of ear protection along with the other standard articles of personal protective equipment.

The Bosch PBS 75 A also has a couple of other issues of note. First and foremost, is the fact that, although it is capable of being bench-mounted upright or inverted, the mounting accessory frame, the clamps, and the linishing table attachment required for bench-mounting are not included with the machine and have to be purchased separately. This is despite, somewhat disingenuously, showing the machine in its mounted state on some product advertising, giving the impression that these accessories are included. Reading the fine print does indicate that these accessories are not included, so some more careful buyers of the tool may have budgeted for purchasing them separately. However, even finding the accessories can be difficult and rather expensive, taking what is an excellent value-for-money tool to the level of a not-so-good one.

The Bosch PBS 75 A also lacks a carry case and comes with no other accessories other than a dust collection box. Dust collection on the device is adequate. Although the dust collection works as well as any other hand belt sander, the amount and fineness of material that is typically generated from sanding rapidly blocks the Bosch's dust box filter, requiring overly frequent emptying and cleaning. In addition, the dust collection box can be challenging to attach securely, leaving it to fall off too easily when working with it. The natural solution for this is to use a vacuum attached to the dust port instead, although finding an adaptor to mediate the connection to the vacuum can be onerous.

Overall, the Bosch PBS 75 A electric belt sander is a high-quality machine designed for the DIY consumer. It is not a professional machine, so it should not be expected to last if used heavily in a professional setting. It does, however, provide great value-for-money as a hand-operated belt sander and provides some great features, such as automatic belt-centring, that work very well. However, the lack of accessories, especially the bench-mounting components, limits its initial use to hand operation and separately purchasing these accessories rapidly decreases its excellent value-for-money proposition. 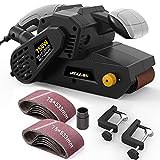 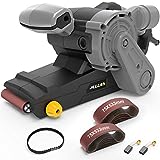 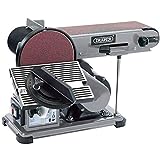 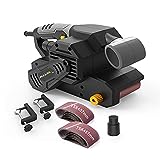