A lesser-known tabletop sander than the more familiar belt and disc sanders is the bobbin or oscillating spindle sander. This is an unusual sander in that the sanding media not only rotates but also oscillates up and down. Bobbin sanders come with different sized sanding drums and sleeves which are particularly useful for sanding curved surfaces as well as surfaces that are internal to the workpiece. The bobbin sander can often be the only sander that can be used effectively to sand less accessible edges.

Bobbin sanders are relatively simple machines which means choosing one is not a particularly tricky task. However, there are some aspects that one should be aware of when buying one.

What to look for in a bobbin sander

Two important parameters of bobbin sanders that can vary between different machines are the length of the spindle and the degree to which it oscillates up and down. These two factors impact the thickness of material that can be effectively sanded using the machine. The longer the spindle and the further it travels when oscillating up and down, the greater the thickness of timber that can be sanded at any one time. Naturally, higher-end professional machines will have a longer spindle and oscillate a greater distance than machines designed for the DIY-er.

An important consideration when choosing a bobbin sander is the availability of replacement sanding sleeves. This is important for both when the sleeves included with the machine wear down as well as when the coarseness of the sandpaper needs to be changed to a higher or lower grit. Replacement sanding sleeves for higher-end professional machines can usually only be sourced from a limited number of suppliers. In contrast, sleeves for less-expensive consumer-targeted bobbin sanders are usually easier to get hold of.

Another important feature that differentiates between bobbin sanders is the ability to angle the table for chamfered or bevelled edge sanding. More expensive machines will usually incorporate the ability to tilt their worktables for this sort of sanding since it is usually more the domain of professionals and dedicated woodworking enthusiasts. DIY-ers, on the other hand, will often find this feature to be superfluous to their needs and usually not worth the extra cost of a machine where this feature is included.

The vast majority of bobbin sanders on the UK market have a cast iron worktable which provides both a robust and durable surface that will last a lifetime, but also adds weight to the machine to steady it while being worked on. Some machines, however, will favour an aluminium table which is less durable but keeps the weight of a machine down to a manageable level, especially if targeted for the DIY consumer.

Spindle speed and oscillations per minute

Spindle rotational speed and oscillations per minute refer to the speed at which the sanding drum rotates and the number of up-and-down cycles the spindle makes within the space of a minute, respectively. Although these factors can differ significantly between different bobbin sanders, they are of lesser importance to the process of choosing a bobbin sander. Higher rotational speeds and oscillation rates mean that the sanding will be more aggressive and will remove more material from the workpiece faster. But it also means that the operator will not have as fine a control over the sanding process as slower speed machines.

As with any sanding, but particularly with mechanical sanding, using a bobbin sander is normally a messy affair. Fortunately, oscillating spindle sander designers have taken into account this aspect of the machine and have incorporated dust extraction channels into the body of the bobbin sanders as standard. The only discrepancy to pay attention to here is the diameter of the dust extraction port to which the workshop vacuum hose attaches to in order to ensure that it is compatible.

One special point to note when it comes to purchasing a bobbin sander for the home workshop is that at the lower end of the price scale, a single type of bobbin sander predominates. Different companies are essentially selling the  same machine with only the company branding on it that is different. However, having been adopted by many different companies is positive for a couple of reasons. First, the almost universal adoption of the design indicates that this type of machine is proven and sound. Secondly, for the DIY-er that has settled on this type of bobbin sander as being most suitable for his or her needs, it means that choosing one is merely a matter of getting the best price.

Popular Bobbin Sanders in the UK

***This review is focused on the Triton bobbin sander TSPS450, however, similar-looking machines, such as the Clarke COBS1, the Draper 10773, and the Scheppach OSM100, are essentially identical sanders to the Triton machine and this review applies to these near-identical bobbin sanders as well.

The TSPS450 bobbin sander from Triton Tools is one member of a group of machines that are all constructed identically using the same or similar components but which are badged differently according to the company that will ultimately go on to sell them. In the case of the bobbin sander from Triton Tools, the machine is orange in colour and has the Triton logo affixed to the front.

Feature-wise, the Triton machine has a 450W brushed motor that generates a spindle rotational speed of 2000 rpm. The spindle also moves up and down at a rate of 58 oscillations per minute working out at about once per second. Since this up and down motion has a stroke length of only 16 mm while the abrasive sleeve height is 115 mm, this means that the sleeves tend to wear out faster at the end closest to the table. Fortunately, the abrasive sleeves can be flipped over so that their opposing ends can be used, and the use of sacrificial wood spacers underneath thinner workpieces can always be used to access the less used central portions of the abrasive sleeves. As for the maximum workpiece thickness that can be sanded down effectively, this is approximately 125 mm, however, if the workpiece can be turned over, this doubles to approximately 250 mm, more than sufficient for most edge-sanding jobs.

Like its generic counterparts, the Triton machine is made of relatively inexpensive materials but which also give the sander its durability. Its orange-coloured body is made of plastic, giving the feel of a sturdy upturned plastic bucket, and it has a cast-iron slab installed on top. The cast-iron tabletop measures 370 x 295 mm and takes the form of an approximate ‘D shape’. It provides a dead flat surface that is square to the sanding spindle and at the same time gives the Triton machine the weight it needs to remain stable during use. Being made of cast iron, however, also means that it has to be protected with lubricating wax or a similar coating to prevent it from rusting, which it will do over time if left unprotected, just from the moisture content of the air. For more experienced users of this type of sander, it should be noted that the table surface is not tilt-able, like some more professional machines, so sanding non-perpendicular surfaces, such as chamfers or bevelled edges, is more difficult to do on this Triton sander.

On the inside of the machine, the electric components are quite simple with parts that may not be of the highest calibre. This may negatively impact the machine’s longevity, and indeed, some users have complained that their units developed functional issues within the first year. Fortunately, Triton Tools sells this machine with a 3-year warranty and is one good reason to get the Triton version of this generic bobbin sander.

Weight-wise the Triton bobbin sander comes in at 12.9 kg making it relatively easy to move around the home workshop where workspace is often at a premium. The not-insubstantial weight and broad base make the machine very stable but it can be further enhanced by bolting the bobbin sander to a tabletop using the holes designed into the body of the machine.

Sanding often generates a lot of sawdust, but one of the great features of these generic sanders, the Triton machine included, is the port connection for attaching an external vacuum system. The port is 38 mm in (outer) diameter and when connected to a shop vac or domestic vacuum system, makes the bobbin sander very efficient at removing the vast majority of the sawdust generated.

The Triton bobbin sander, like its generic counterparts, comes with seven abrasive sleeves of increasing diameter, the six largest of which slide onto rubber drums (also included) which in turn slide over the bobbin sander’s oscillating spindle. The smallest of the abrasive sleeves slides directly over the spindle itself without the need for a rubber drum. All the abrasive sleeves are 80 grit which puts them at a medium level of coarseness, however, sleeves of other grits, both finer and more coarse, for different sanding applications, are readily available from various online sources.

In addition to the abrasive sleeves and drums, the machine also comes with seven inserts of different sizes that cover the gap around the different-sized abrasive sleeves/drums, and a wrench to secure the sanding drums to the spindle. The body of the machine also incorporates slots and protrusions to accommodate all of these accessories making for a very compact and well-thought-out bobbin sander design.

Overall, the Triton bobbin sander TSPS450 is a very good choice for the DIYer on a budget and does not break the bank when purchasing this specialised machine. It represents one of several similar machines that are constructed identically but exhibit different colour schemes and branding. Because of this, when choosing one of these bobbin sanders, it is merely a matter of buying the cheapest version of the machine available at the time as well as taking into account the reputation of the company from which it is sold. 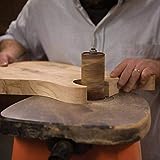 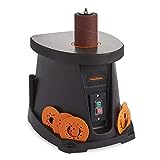 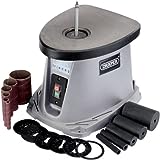 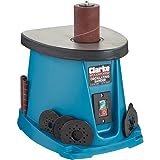 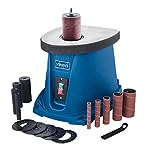